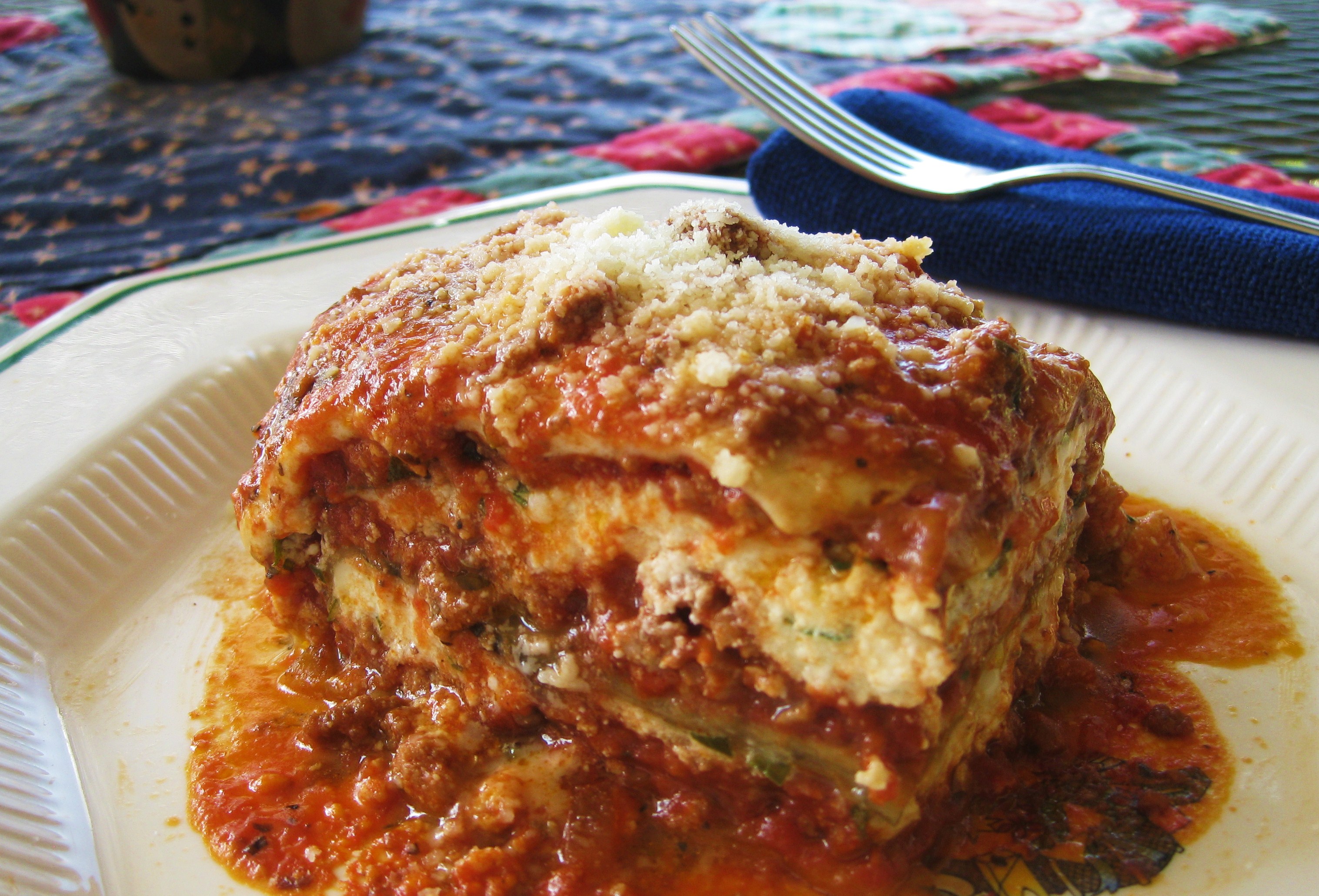 I’m sure I’m not the only one constantly inspired by food I see or hear about.  As soon as someone mentions a new restaurant, or had an interesting dish or something deliciously sinful, I’m instantly interested.  I want to know every detail so that I can try to recreate it myself.  Sometimes it’s simply the general idea of how a dish is presented or a picture that catches my attention or a specific ingredient that has my head whirling with ideas!

For over a year now, I have heard about a coworker’s eggplant lasagna.  I’ve never had a chance to taste it, but all those that did raved highly about it.  Obviously, my interest peaked and I had to talk to Vinny (and yes, he’s Italian, which had me even more interested in his lasagna).  Then during the holidays it seemed like everyone was talking about making lasagna.  Phyllis at Food Flowers Herbs and Life posted her lasagna recipe for Christmas Eve and several other friends along with my sister were chatting about either making it or having had it at a dinner party.

Obviously my craving for it increased; I really have not made classic lasagna in a few years.  Vinny’s recipe basically swaps out the pasta for eggplant slices.  I’ve made vegetarian lasagna in the past but liked this idea of no pasta, i.e, carbs!  He peels and cuts the eggplant into thin slices, breading and frying them.  I skipped the breading part and just fried each slice.  While I normally bake my eggplant and he said he does at times also, I agreed that frying the eggplant would give the lasagna a richer taste.  And it certainly did; everyone loved it!  It was meltingly tender, full of flavor and definitely fulfilled my lasagna craving!

2 28 oz cans whole tomatoes, squeezed or blended into a puree

For the ricotta layer:

To prepare the sauce:  In a large skillet, cook the ground beef and pork until browned.  Remove from pan and drain well from the grease.  In a large stockpot, sauté the onion in olive oil until soft.  Add in the tomato puree, basil, garlic, salt and pepper.  Simmer for 10 minutes.  Add in the browned meat and continuing cooking on low heat for about 1 hour.  Can be made ahead of time.

To prepare the lasagna:  Preheat oven to 350 degrees.   In a large skillet, fry the eggplant slices a few at a time until browned on each side.  Set aside.  Mix together the ricotta, parmesan, mozzarella, egg, parsley and pepper.  In a baking dish, spoon a thin layer of sauce on the bottom and begin layering with the eggplant slices, meat sauce and ricotta mixture.  Repeat and finish with the layer of eggplant slices and some sauce on top.  Cover the dish with foil, place on a baking sheet and bake for about 40 minutes.  Remove the foil, sprinkle on the mozzarella cheese and bake until bubbly, about 15-20 minutes.  Allow to cool slightly and set before serving.