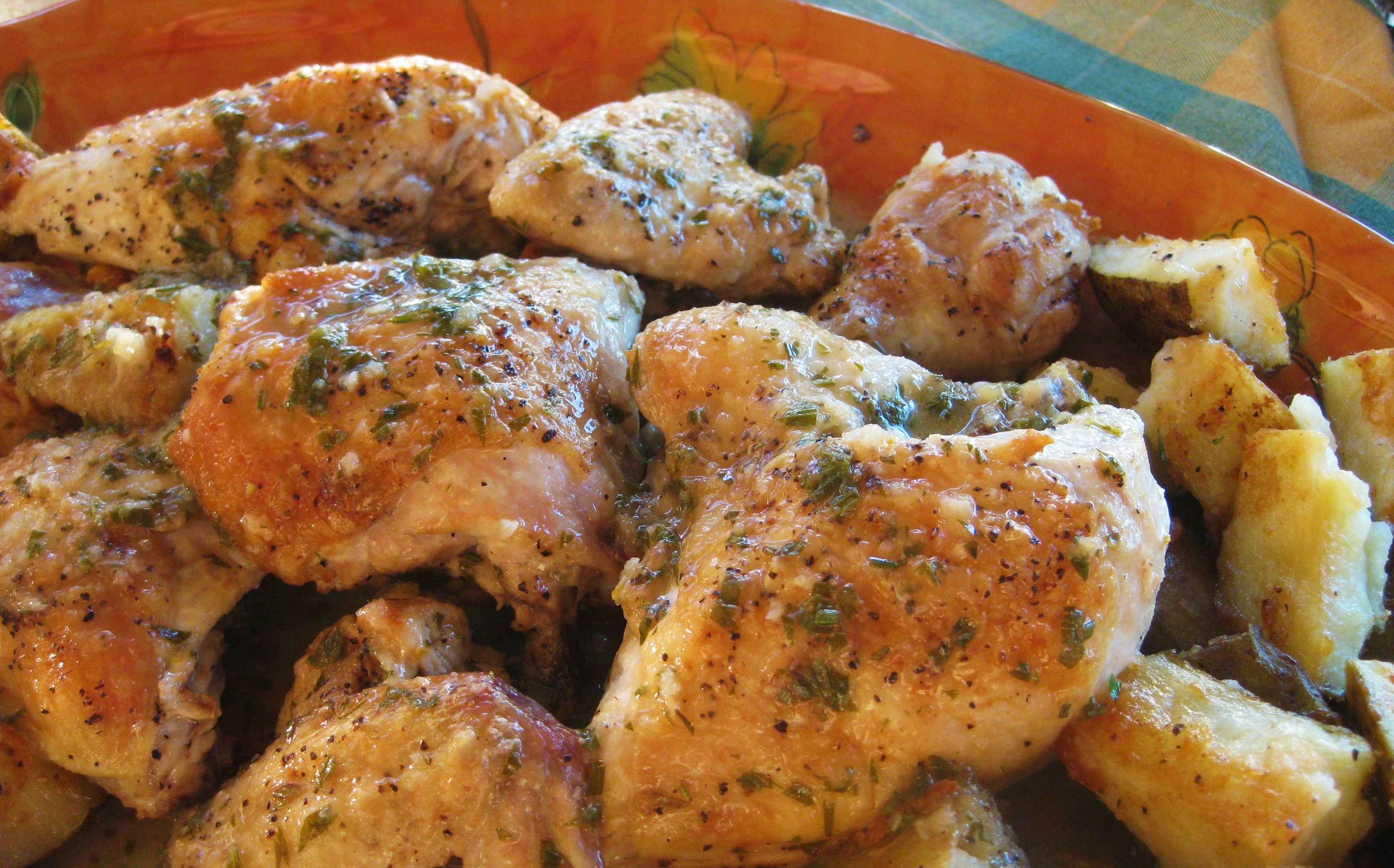 While making the roasted oranges the other day, it reminded me of my ultimate favorite lemon sauce.  It’s actually the method of broiling the lemons that sends it over the top!  The lemons are cut crosswise, drizzled with olive oil, salt and pepper and broiled until the pulp softens and plumps up.  When cooled, the pulp and juice is squeezed out resulting in gently sweet, tart lemony goodness.  I learned this from my favorite chef, Michael Chiarello and became my best tip for creating many other lemony sauces.

The chicken itself is moist and perfectly baked every time.  A simple chicken and potato dish fabulous for a lazy Sunday afternoon.  There are a few steps involved, but having everything mise en place (put in place) will allow this and anything else you’re cooking to be prepared with relative ease.  At the final point in preparing the sauce, if it tastes too lemony for your preference, adding a tablespoon of butter to the sauce should mellow it as well as add a nice gloss to your sauce!

Chicken with Lemon and Rosemary Sauce

For the broiled lemons:  Preheat the broiler.  Cut a small slice off both ends of each lemon (to allow the lemons not to roll) and then cut in half crosswise.  Arrange the lemons on a baking dish suitable for broiling, drizzle on olive oil and sprinkle on kosher salt and pepper.  Broil until brown, plump and soft, about 10 minutes.  Remove and cool.  Squeeze the lemon over a sieve to capture any seeds and squeeze out all the pulp and juice, mashing to get out as much as possible.  Discard the peels and set aside.

For the potatoes:  In a large pot, place cut up potatoes in cold water and bring to boil.  Simmer until tender about 15 minutes.  Drain and set aside.

For the chicken:  Preheat oven to 425 degrees.  Season chicken with salt and pepper.  In a large ovenproof skillet, heat olive oil over medium high heat until hot.  Add the chicken, lower to medium and cook, turning once until brown on both sides, about 10 minutes.  Remove to a platter.

Return the skillet to medium high heat, add additional oil if necessary and add in the precooked potatoes.  Season with salt and pepper and allow to brown all over, about 10 minutes.  Drain off any excess oil, top the potatoes with the chicken pieces and place in the oven to continue cooking about 15-20 minutes or until chicken is cooked through and juices run clear.  Remove the chicken to a platter, placing the potatoes to the side.  Return the skillet to medium high heat on the stove top.  Add the lemon juice and pulp, garlic and rosemary scraping the bottom of the pan.  Add in the reduced chicken stock and simmer.   Stir in the parsley and season to taste with salt and pepper.  If sauce tastes too lemony, stir in the optional tablespoon of butter.  Pour the sauce over the chicken and serve immediately.  Makes about 4 servings.

January is #citruslove month!
Please join in on the #citruslove by linking up any citrus recipe from the month of January 2012.  Don’t forget to link back to this post, so that your readers know to come stop by the #citruslove event! The twitter hastag is #citruslove :).
Cohosted by:
A Little Bit of Everything, Astig Vegan, Baker Street, BigFatBaker, CafeTerraBlog, Cake Duchess, Cakeballs Cookies and More, Easily Good Eats, Elephant Eats, Georgiecakes, Hobby and More, Mike’s Baking, Mis Pensamientos, No One Likes Crumbley Cookies, Oh Cake, Parsley Sage Desserts and Line Drives, Peaches and Donuts, Savoring Every Bite, Simply Reem, Smart Food and Fit, Soni’s Food for Thought, Teaspoon of Spice, That Skinny Chick Can Bake!!!, The Art of Cooking Real Food, The More Than Occasional Baker, The Spicy RD, The Wimpy Vegetarian, Vegan Yack Attack, Vegetarian Mamma, You Made That?