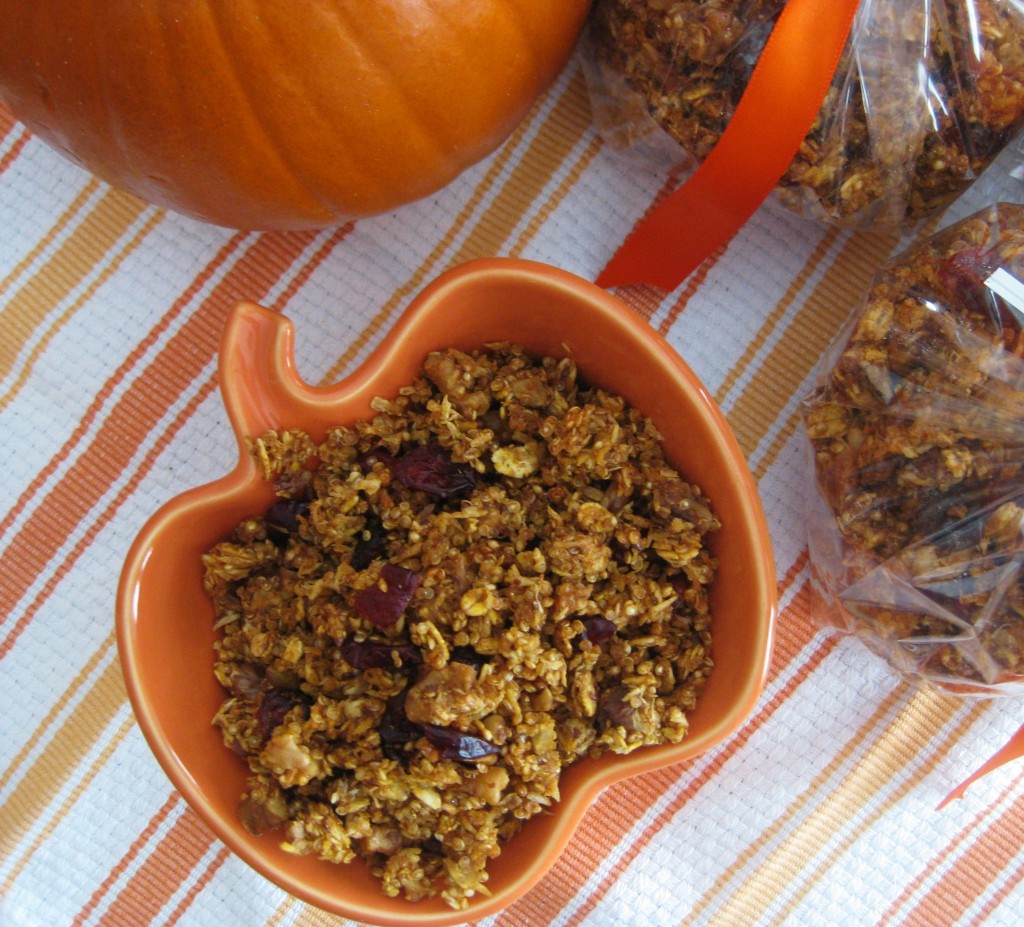 I have to be honest here, this started with a desire to make pumpkin quinoa pudding, you know, like a rice pudding swapping the rice for quinoa.  Not so uncommon in my life, I start with an idea I’m excited about, plan it out and along the way another concept pops up.  Actually, let’s cross off “another” and replace with “several“!

It then becomes what to make first as I stop to jot down the flurry of ideas and images racing through my mind.  This time it had to do with my noticing the oatmeal jar..right next to the quinoa jar.. right next to the near empty granola jar!  Priorities rule, refill the granola jar!

So with the quinoa already rinsed in preparation for my original idea, I continued to cook the quinoa in almond milk but used less than I planned for when making a creamy pudding.  I added pumpkin puree, oatmeal and all those wonderful Autumn spices and baked it to a golden brown, addicting, gonna make another batch soon, granola!

In a medium saucepan, add in the quinoa, milk and spices.  Bring to a boil, cover and reduce to a simmer.  Cook for approximately 15 minutes until all the milk has been absorbed.  Allow to cool slightly.

Preheat oven to 300 degrees.  In a large mixing bowl, combine the oatmeal, cooked quinoa and walnuts.  In a separate bowl stir together the pumpkin puree, salt, spices, syrup and coconut oil.

Add the liquid to the oat/quinoa mix and stir together until combined well.  Spread evenly onto a large baking sheet.  Bake, stirring occasionally until the granola turns a nice, even golden brown, around 30-40 minutes depending on the oven.

Remove granola from the oven and allow to cool, stirring occasionally.  Add in the dried cranberries.  Stored cooled granola in an airtight container.  My favorite way to eat this….topped on soft serve banana pumpkin ice cream!!