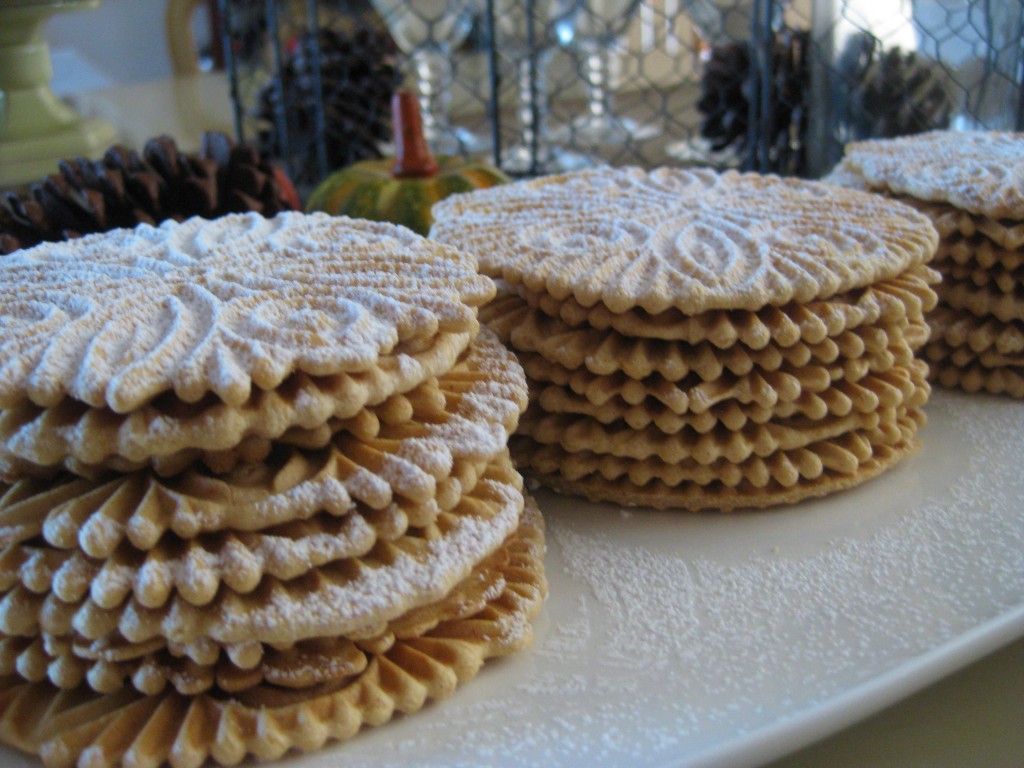 Do you ever get something in your head that just consumes your thoughts and you just have to have it?  And attempts to make it are unsuccessful… yet you refuse to accept defeat?

I’m referring to a cookie recipe here, but as I write this, I realize it’s actually how I react to almost every area of my life!  I so don’t like hearing something won’t work, or can’t be done.  I’ll keep trying until I’ve exhausted all my options feeling satisfied that all ideas, attempts and effort has been done.   A  close, long time friend caught on early to my personality saying that if he wanted to get me to do something, he’d tell me to do the opposite!!  Darn… 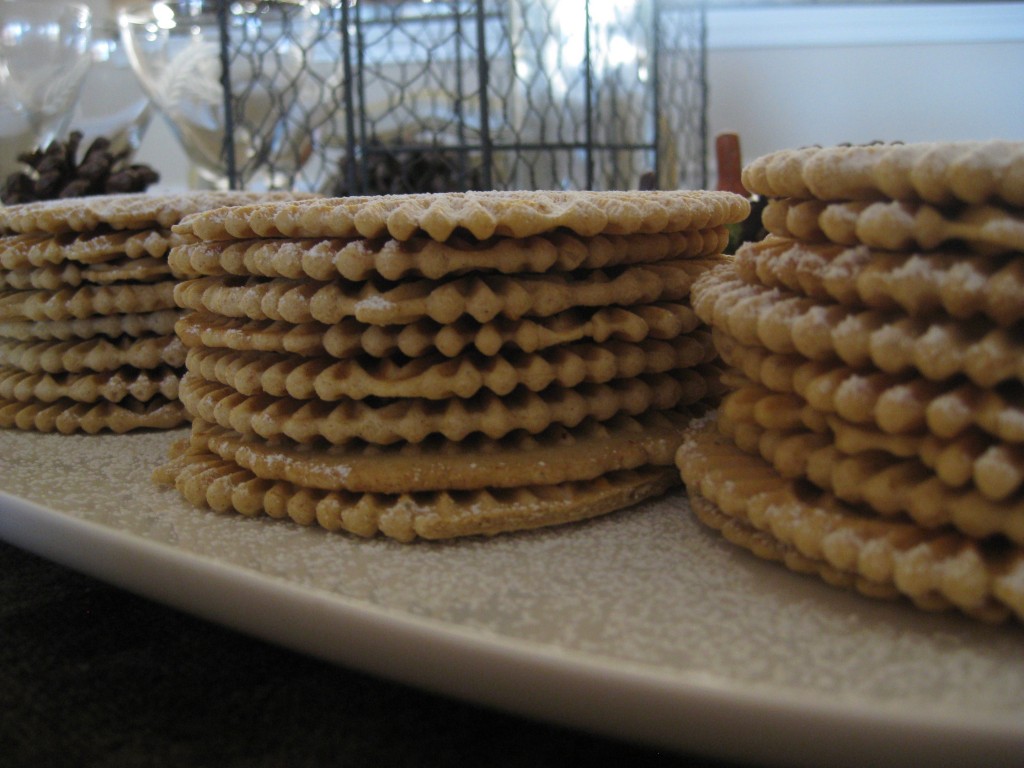 Making pizzelles with pumpkin had been on my mind a lot lately.  In fact, I saw notes of it from last year’s fall baking ideas.  I’ve not posted a pizzelle recipe as it does require yet another kitchen specific gadget.  I’m really not a gadget girl, but I am Italian and a pizzelle iron can be found in pretty much every Italian kitchen!

Memories of the Italian cookie tray always had a stack of these crisp, light pizzelles flavored with anise, vanilla, lemon or as a real treat for me as a child – chocolate!

The result?  Well, you’d love the smell of my kitchen for sure, all spicy and comforting!  And while you’re visiting, let me pour you a hot espresso, or a cup of pumpkin tea or a nice spiked cider as you bite into one of these addicting pizzelles!  Crisp and light, as a pizzelle should be, intensely flavored with pumpkin, cinnamon, cloves, nutmeg and ginger. 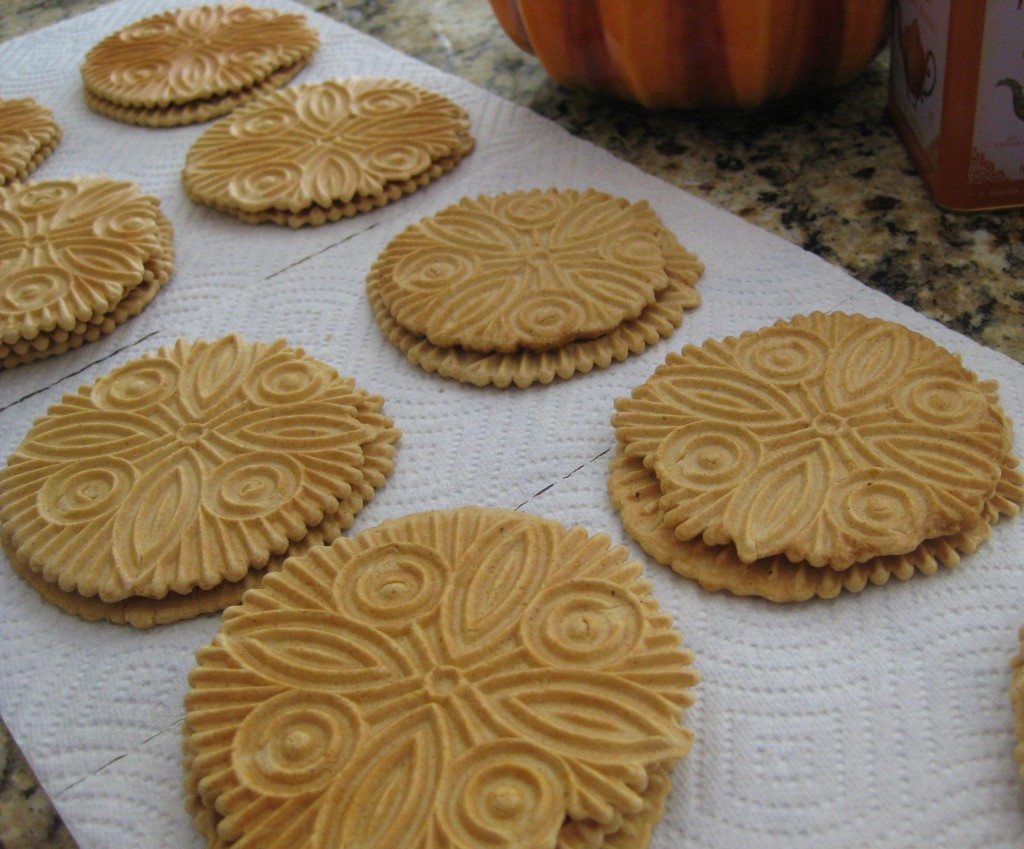 White wheat flour blend replaced the white flour, the pumpkin puree allows for less butter, however, even better coconut oil replaced the butter.  To get that crispness, the twice baking method from my biscotti baking did the trick!

In a medium bowl, combine the flour, baking powder, salt and spices together, set aside.

In a large mixing bowl, beat the eggs, sugar and pumpkin liquor.  Mix in the coconut oil and pumpkin puree.  Stir in the dry ingredients until combined.  The batter should be stiff enough to be dropped by a spoon in the middle of each pizzelle form.  Press close and either follow the light indicator or allow to cook for about 45 seconds to 1 minute.  Remove the pizzelles and place on the baking sheet.  Continue until all batter has been used.  Place the baking sheets into the oven and bake to crisp up for about 5-10 minutes, watching closely so they do not burn.  Remove to a paper towel to cool.  Serve with powder sugar. Store in an airtight container.  Makes about 48 pizzelles.