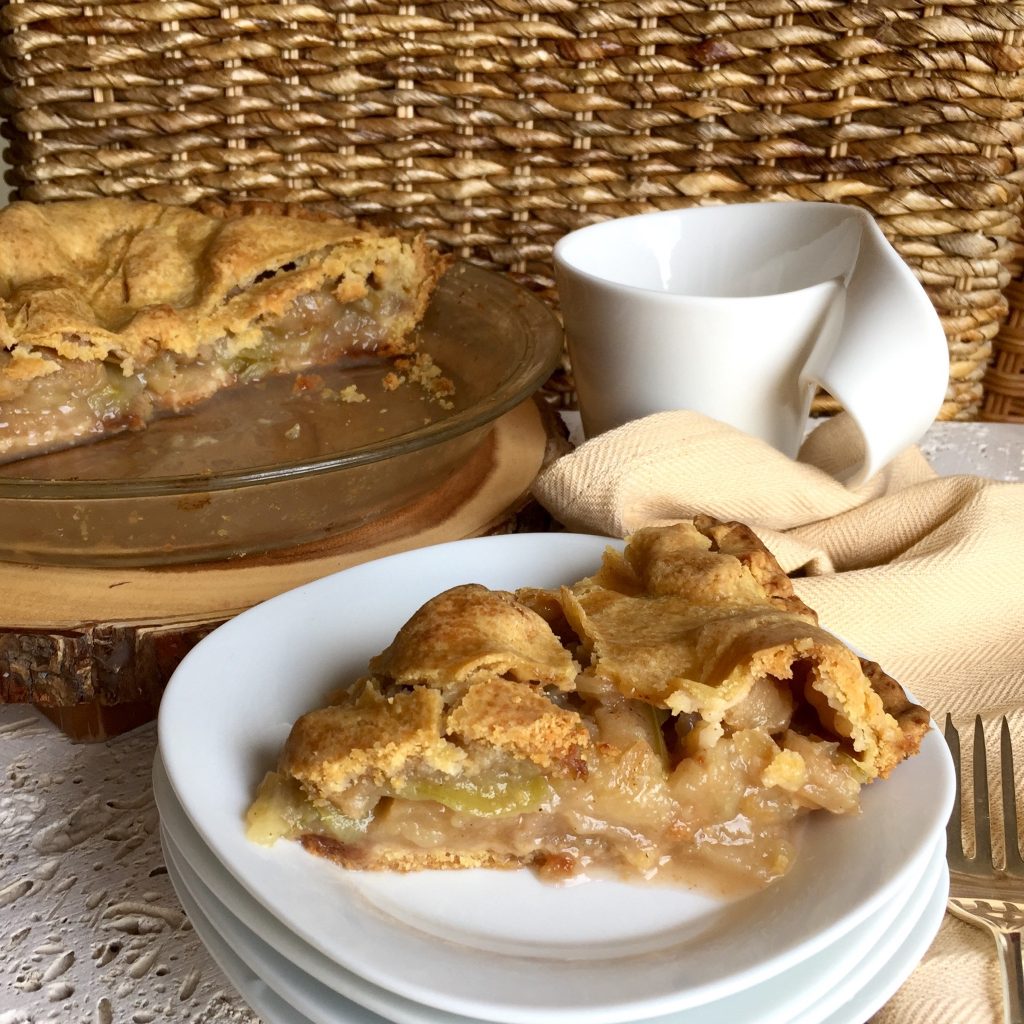 Perfectly, imperfect!  Pretty much how I view myself and my pie crust!  Sometimes I roll it too thin, other times too thick, sometimes it breaks and I patch it up.  Always very forgiving, allowing the breaks and mistakes to gently fix themselves.  And in the end, it bakes up beautifully, bubbling with juicy flavor and just the right sweetness.

This is a new post as I’ve been working on “veganizing” my pie crust recipe.  I have had success in simply swapping out the butter for vegan butter and also using vegan shortening, which is a blend of coconut and palm oils.  However, I struggle with all the ingredients I see in those vegan products.  I do purchase them and use them when I truly want a “buttery” taste, but I strive to eat whole foods, and products with labels having the very minimal of ingredients.

So whenever I seek to create a new recipe, I check first with mom.. via her very tattered and fragile recipe notebook and also, my favorite cookbook, dear to my heart since I never had a grandmother, Cooking with Italian Grandmothers to see if I can get a some tips and inspiration.  I can honestly say, I’ve not been let down, and finding they both have used olive oil in their pie crust confirmed testing this out.

I don’t normally use a lot of olive oil, but it is considered a healthy fat, and as the ingredients only list “extra virgin olive oil”, I am much happier with that.  For this recipe, and as my go to for extra virgin olive oil, I purchase Trader Joe’s Premium Extra Virgin Olive Oil.  If you really want to go crazy with your olive oil, my favorite little store in Mount Dora, Florida, is The Olive Oil Company where you can taste and sample a wide variety of gourmet olive oils and vinegars.  For use in a pie crust, it would be better to use an extra virgin olive oil with a very minimal and light flavor.

In Italy this dough is known as pasta matta, made only with flour, water and olive oil.  It is more like a Pate Briseè, exchanging the butter for olive oil.  When using nondairy milk, it is best to use one with less fat; I used an unflavored almond milk.  There is no need to have all the ingredients chilled, or to refrigerate the dough 30 minutes prior to rolling out.  Rolling the dough very thin is actually easy between two sheets of wax paper.  Just make sure the wax paper has been floured lightly and press firmly when rolling to achieve the thin dough.  I’ve made this pie twice in the past week.  The crust is tender,light and flaky.  The overall taste is pure apples, not overly sweet or spiced, a beautiful blend of apples, hint of cinnamon and a tender crust.

Preheat oven to 400 degrees. Combine the flour and salt in a medium bowl.  Combine the milk and oil, but do not stir together.  Pour into the bowl with the flour and salt.  Mix together with a fork until just combined; press into a large ball by hand.  Be careful to not overwork the dough.  Divide the dough into two pieces shaping by pressing gently into two flat rounds.  Wrap up one in wax paper.  Roll the other disc between two lightly floured wax paper sheets.  Roll to a very thin crust reaching a 12inch diameter.  Gently place into a 9″ pie plate, lightly sprayed with coconut oil.  Trim the edges leaving about a 1/2 inch, patching where needed with the extra dough.  Place the crust lined pie plate and the top crust dough in the refrigerator.

Combine the tapioca or flour, cinnamon, nutmeg and sugar in a small bowl.  Peel, core and thinly slice the apples.  Toss into a large bowl and mix with the combined tapioca/spice/sugar mixture.  Stir together until nicely combined.  Place all the apples into the bottom crust, mounding more in the middle.  Roll out the top crust just as done with the bottom, and gently place on top of the apples.  Trim the edges and flute the two crust layers together in a pretty pattern.  Brush the top crust with a little bit of nondairy milk and sprinkle on some sugar, avoiding the crust rim.  Make several slits on top and cut out a small round circle in the middle to release steam while baking.

Place in the oven, middle rack and bake for approximately 50 minutes.  I start with placing a sheet of foil lightly on top of the pie, bake for 30 minutes, remove the foil and cover the crust with a pie ring or strips of foil.  Continue baking until bubbly and lightly browned.  Remove and cool completely on a rack.